A link to the DG (Gold Ennie Award winning) quickstart rules, including a copy of “Last Things Last”

Some notes I wrote about the sources of inspiration for the contents of Clyde’s footlocker. 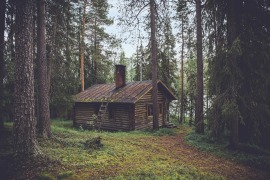 Just a cabin the woods, nothing to see here folks…

Other Appearances
Adam Scott Glancy wrote a short story based on the original version of the scenario for the horror anthology Shotguns v. Cthulhu (2012).

Dennis Detwiller has prepared several illustrations (some containing spoilers) for the scenario – 1, 2

On the Remembered Slopes (Part I, Part II)

Non-Human User: the Side Tracks